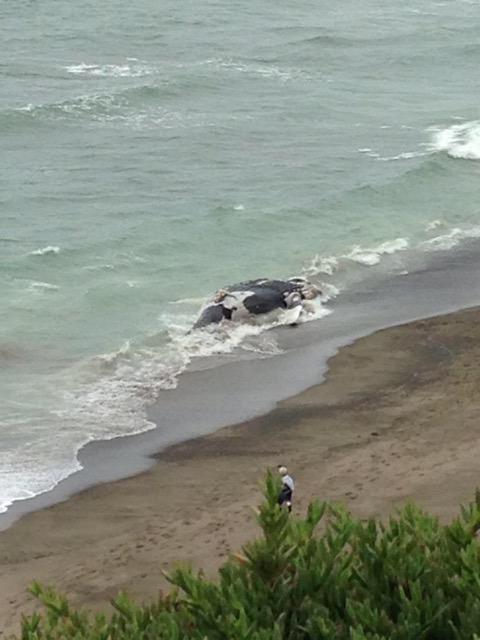 San Francisco Chronicle, Aug 2, 2015 (emphasis added): Another dead whale washes up on Pacifica beach — Yet another dead whale washed up at a Pacifica beach in what has become an inexplicable summer trend, marine officials reported… The whale that washed up Sunday is just the latest in a string of mysterious dead whales found in the area. A humpback whale washed up on Sharp Park Beach in Pacifica in May, and in April the rotting carcass of a sperm whale on the beach near Mori Point left scientists baffled as a dissection revealed no official cause of death.
http://www.sfgate.com/bayarea/article/Another-dead-whale-winds-up-on-Pacifica-beach-6420596.php

AP, Aug 2, 2015: A dead humpback whale has washed up at a beach in the city of Pacifica, the latest of a series of dead whales found along Northern California’s coast…
http://www.capradio.org/articles/2015/08/03/dead-humpback-whale-found-in-northern-california-beach/ 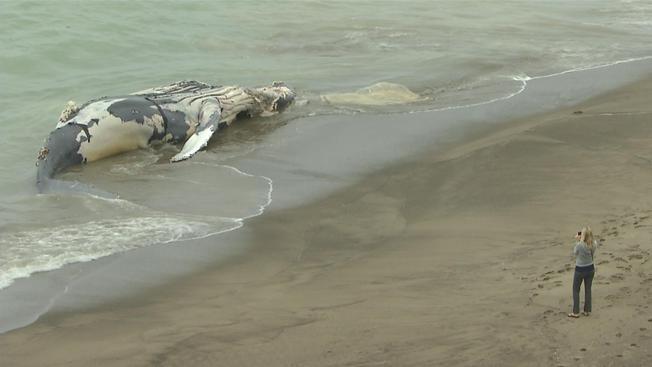 Sun Times, Aug 2, 2015: A dead Humpback whale washed onto the shore at a Pacifica beach Sunday… This whale is just one of numerous dead whales that have washed onto California’s beaches this year… The cause of these occurrences is still baffling scientists…
http://sanfrancisco.suntimes.com/sf-news/7/74/228797/dead-whale-pacifica-beach

NBC Bay Area transcript, Aug 2, 2015: Can’t believe it has happened again — in Pacifica scientists ware trying to figure out exactly what has killed a whale that has washed ashore… the third dead whale to wash ashore in the last few months… Neighbors are concerned… (Moe Flannery, California Academy of Sciences:) “We found injuries consistent with blunt force trauma… We can’t say definitively, but we did see signs, hemorrhaging in the muscle” … Neighbors say it reminds them of 2 other dead whales… (Witness:) “It’s just really sad to see, and this the third one I’ve seen in the last couple of months”… So again, this is still under investigation.
http://www.nbcbayarea.com/news/local/Dead-Marine-Mammal-Washes-Ashore-in-Pacifica-320428302.html

San Luis Obispo Tribune, Jul 8, 2015: Two dolphins die on beach at San Simeon Cove… The baby dolphin… died as trained rescuers frantically tried to keep it alive… “It was heartbreaking, so sad” to hear the dying baby calling out, said Carolyn Skinder, program coordinator for the Monterey Bay National Marine Sanctuary’s southern region… Officials say they don’t yet know what killed the animals… They hope to determine whether the two dolphins were related, and what may have killed them.
http://www.sanluisobispo.com/2015/07/08/3713690_dolphins-dead-san-simeon-cove.html?rh=1

More on Northern California whale deaths: Surge in whale deaths along West Coast — Experts: “So many in such a small area is setting off alarms… We really don’t know what’s going on” — Professor: “I’m not sure this is just a natural event… There may be a disease in ocean” — Gov’t: “We’re not even concerned about it” (VIDEOS):
http://enenews.com/experts-alarming-number-whales-found-dead-west-coast-many-small-area-setting-alarms-really-dont-whats-going-professor-be-disease-ocean-videos

Somebody should be made to pay for these poor creatures’ deaths! It is an outrage! While Fukushima, to date, has continued to pour radiotoxins into the Pacific day in, day out, non-stop since March 2011. First the Oceans die, then we die!
What are you people thinking about out there? Has it not sunk in yet?

TV and the news will continue to claim they don’t know what is causing these deaths. And you are going to sit there, like a bunch of fucking idiots, and believe what they say, knowing, that 24/7 for 4.5 years Fukushima has poured tons upon tons of radioactive material into the Pacific, and not know what is causing this? Then you too should be taken out and shot, along with the Japanese govt., and the new media, and any and all the scientists that pretend they don’t know why.

Just like when they were talking about, and trying to figure out why so many whales were hanging around in California, and being so friendly…They were begging us not to kill them, don’t you get it? They wanted to know why they are dying, why WE are killing them.

This breaks my heart. The whole Pacific Ocean so polluted with radiation, that everything is either dead or dying, and people want to wonder what the fuck!!!
When you contract cancer, from eating the fish all these years, maybe then, it will sink in. I don’t know. Most people are couch potatoes that believes everything the govt. tells them, and waiting around believing that they are safe. HOW STUPID ARE YOU PEOPLE? DON’T YOU KNOW THE EXTENT THAT YOU HAVE BEEN NUKED?

Sorry, I just can’t believe everyone in this country is so fucking stupid.