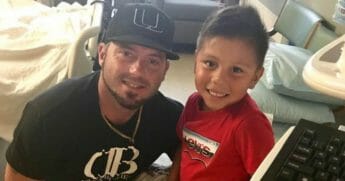 6-Year-Old Saves Teacher’s Life After Fall Knocks Her Unconscious: ‘It Looked Like a Murder Scene’
By Laura Stewart
Published September 5, 2019 at 3:31pm

6-Year-Old Saves Teacher’s Life After Fall Knocks Her Unconscious: ‘It Looked Like a Murder Scene’

A 6-year-old boy is being hailed as a hero after his quick-thinking action saved the life of a substitute teacher at Frostproof Elementary School in central Florida.

On Aug. 22, Joyce Darr, 67, fell and suffered a serious head injury while teaching a group of kindergarteners. Panicked at the sight of their teacher unconscious and bleeding on the floor, the children froze, according to WTVT.

But one student, Max Aguilar, instantly leaped into action, running out of the classroom to find help.

In the middle of Darr’s lesson, another student accidentally knocked into the teacher, causing her to lose her balance and fall. She hit her head on one of the desks, which cracked her skull and caused severe bleeding.

Derek told The Western Journal that the area where his mother fell “looked like a murder scene” when custodians came to clean up after the accident.

After Max ran for help, Darr was airlifted to a nearby hospital.

The injury left Darr with bleeding in her brain, which likely would have killed her if help had not arrived when it did.

“Of all the students in the class, [Max] was the one that immediately ran for help,” Polk County Sheriff Grady Judd said in a video posted on Facebook.

Darr was placed on life support for twelve days.

“All we can do is wait & pray,” Darr’s son wrote on Facebook.

But thanks to Max, Darr is recovering and able to walk again.

Derek arranged for Max and his mom to visit Darr in the hospital and, as a thank you, gifted him a pair of Jordan sneakers.

The sheriff’s department also gave the tiny hero a Good Citizenship Award and a new bike.

The 6-year-old’s mother, Monica Aguilar, teared up during the ceremony where Max was given his award.

Darr is forever thankful to the little boy who saved his mother’s life and is grateful to God for her recovery.

“Mom is very weak but is alive and getting stronger every day,” Darr told MSN News. “She was standing some today.”

We are committed to truth and accuracy in all of our journalism. Read our editorial standards.