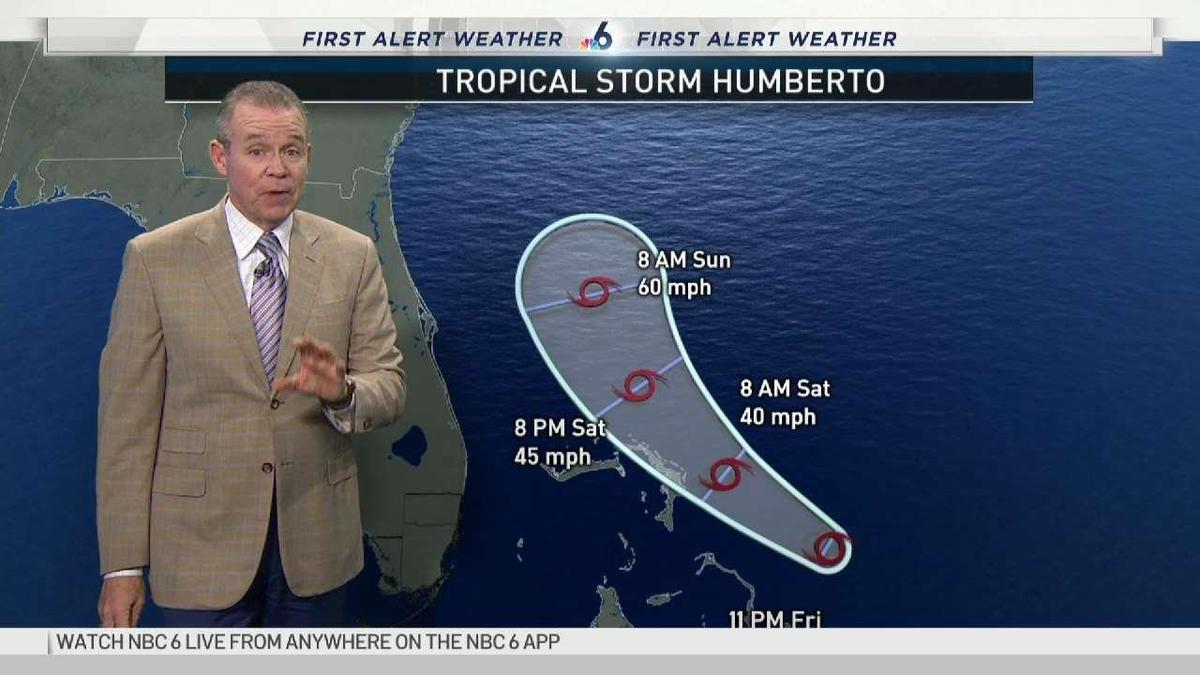 (GRAND BAHAMA) JUST IN: #TropicalStormHumberto Lashes an already devastated parts with heavy rain and strong winds on Saturday, and forecasters said it was likely to become a hurricane before the end of the weekend creating worry for the 2,000 plus people living in makeshift shelters after #HurricaneDorian #AceNewsDesk reports
5h ago

#AceNewsReport – Sept.14: The storm is expected to leave the northwestern Bahamas later on Saturday and then will move well offshore of the east coast of Florida and into the Atlantic Ocean through early next week, according to the U.S. National Hurricane Center: Humberto had maximum sustained winds of 50 miles per hour (85 km per hour) with higher gusts, and was expected to become a hurricane by Sunday night, the Miami-based NHC said on Saturday Reuters reported.

It barely moved during Saturday morning, the NHC said, and was located about 30 miles (45 km) east-northeast of Great Abaco Island. It was forecast to resume a slow motion toward the northwest and north later in the day: Forecasters said the storm could drop up to six inches (15.24 cm) of rain in some areas but that it was not expected to produce significant storm surge in the northwestern Bahamas, which were hammered earlier this month by #HurricaneDorian: Humberto could, however, hamper relief efforts in the area where thousands of structures were flattened and 70,000 people were left needing shelter, food and water and medical aid:

Dorian slammed into the Bahamas on Sept. 1 as a Category 5 storm, one of the strongest Atlantic hurricanes ever to hit land, packing top sustained winds of 185 miles per hour (298 km per hour): Bahamian Prime Minister Hubert Minnis has said the official death toll from Dorian stands at 50 but that hundreds of people are missing and it is expected to rise.

United Nations Secretary-General Antonio Guterres arrived in Nassau on Friday in a show of international support: He met with evacuees at a shelter and told reporters Dorian should be a wake-up call for the world about the dangers of climate change………………..“If we don’t reverse the situation we’ll see tragedies like this one multiplying and becoming more and more intense, more frequent,” Guterres said. “Climate change is running faster than what we are. We need to reverse this trend.”

Tropical Storm Humberto is threatening Grand Bahama Island just weeks after the island nation was pummeled by Hurricane Dorian: The potential danger is creating new worries for the more than 2,000 people living in shelters and those trying to rebuild their homes. Meteorologist Jeff Berardelli is tracking the storm: CBS reports https://ift.tt/30hD8zc

If you are traveling to a hurricane-prone area in the coming months, monitor the National Hurricane Center’s website for up to date information: http://ow.ly/htJs50w8K1G #StormSeasonpic.twitter.com/BLVeQYsaJu https://t.me/TravelGov/5551

Editor says #AceNewsDesk reports & #Brittius says are provided by Sterling Publishing & Media News Chat https://t.me/joinchat/Di_0I1O9-Gz1ogusgUArog and all our posts, links can be found at here Live Feeds https://acenewsroom.wordpress.com/ Ace News Services Posts https://t.me/AceSocialNews_Bot and thanks for following as always appreciate every like, reblog or retweet and free help and guidance tips on your PC software or need help & guidance from our experts AcePCHelp.WordPress.Com or you can follow our breaking news posts on AceBreakingNews.WordPress.Com or become a member on Telegram https://t.me/acebreakingnews all private chat messaging on here https://t.me/sharingandcaring