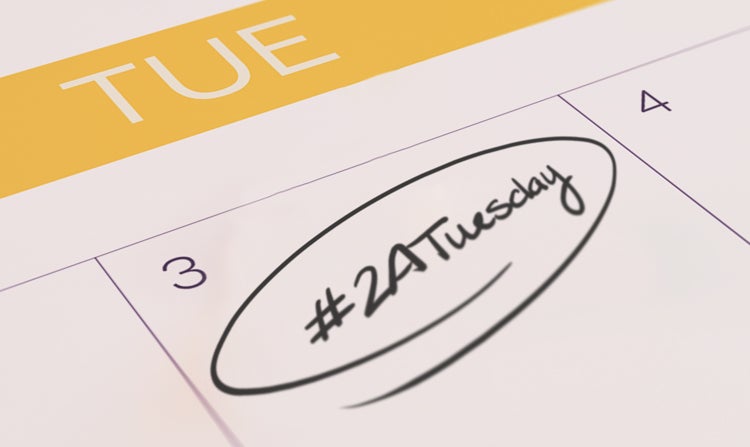 Last year, Wisconsin Carry, Inc. (WCI) won a lawsuit against a school in Wisconsin that forbid a student from wearing a pro-gun T-shirt. In addition to being ready, willing, able and eager to file as many lawsuits as there are willing plaintiffs in schools across the state, WCI has started #2ATuesday. Nik Clark, CEO of WCI, provides background and his reasoning behind the movement.

Last year, Wisconsin Carry, Inc. (WCI) won a lawsuit against a school in Wisconsin that forbid a student from wearing a pro-gun T-shirt. In addition to being ready, willing, able and eager to file as many lawsuits as there are willing plaintiffs in schools across the state, WCI has started #2ATuesday. Nik Clark, CEO of WCI, provides background and his reasoning behind the movement.
Let’s Go Viral

The essence of 2ATuesday is to harness the power of social media’s “viral trends” among the younger generation to drive a pro-gun cultural movement. Baby boomers and Gen Xers are aging out of the operative generation. Due to the past 20 to 30 years’ worth of saturation of anti-gun messaging in schools, millennials and Gen Z will most likely not present a pro-gun voting majority in the future.

2ATuesday encourages students to wear non-violent and non-threatening pro-gun or pro-Second Amendment apparel to school on Tuesdays and to post selfies or other photos on social media with the hashtag #2ATuesday. Imagine the impact on the hearts and minds of younger people if #2ATuesday became viral like the Ice Bucket Challenge.

We need to drive a cultural change if we want to see the Second Amendment and our right to carry protected. Asking legislators to hold firm and protect Second Amendment rights as they increasingly lose support is a hopeless proposition — even if it’s simply a perception due to the media’s false realities.
History Doesn’t Lie

It is clear from looking at history that legislation and legislators do not drive cultural change. They follow it. They attach to something after it becomes popular for political expediency (see civil rights, gay rights, etc. for proof). Politicians chase popularity, trends and votes … not principles.

If all we do is demand legislators reject gun control, we are destined to lose. It’s only a matter of time. The Defense of Marriage Act (DOMA) didn’t protect same-sex marriage; concealed carry (and constitutional carry) laws won’t protect our gun rights. And truthfully, I believe the Supreme Court — even with a “conservative” majority — won’t be a firewall if the anti-gun sentiment continues to grow. I don’t foresee the Second Amendment ever being repealed, but I do foresee the courts gutting it to a point of insignificance and symbolism only.

Guns are cool. The historic role of guns in the hands of law-abiding citizens is very cool. The value and role of firearms is as applicable and necessary today as when the nation was born in 1776. Beyond just a trend, there is a great story to tell about guns. #2ATuesday is a way to tell that story.
Youth Culture and #2ATuesday

Young people, especially high schoolers, are prone to challenge authority and, at the same time, desperately seek approval of peer groups. Adults often take cues from their kids on trends. #2ATuesday is about having youth show pride in something they believe in: the right to protect and defend others.

At first, only the truly bold and brave will participate. But after they succeed, others will follow. In addition, Wisconsin Carry, Inc. can support students with litigation against any school that so much as reprimands them for wearing pro-gun apparel.*

Of course, I say this knowing that a school’s legal counsel will most likely quickly advise the district that it will lose. But if a couple of districts want to try to fight in court, we would be thrilled. It only takes one student whose parents encourage him or her to wear pro-gun apparel and are willing to be a silent plaintiff in a lawsuit on the child’s behalf to win — and blaze a trail for others to do the same.

If we drive a cultural movement to support our God-given right to self-defense, politicians will fall all over themselves to pass pro-gun legislation. Instead of the citizenry idly hoping for protection and principle, legislators (being the popularity-chasing folks they are) will be going out of their way to attach themselves to a cultural movement.
Looking for an Outlet

The mainstream news media will never accurately represent the pro-gun sentiment, even if it does begin to grow. Even if 75 percent of U.S. residents obtain concealed carry licenses, the legacy network news and Hollywood power brokers won’t be on board. Social media is the only venue we have to drive a national movement. We need to do it sooner than later — before social media censors pro-gun entities.

At the end of the 2018/2019 school year, WCI held a weekly contest providing swag to the best #2ATuesday photo. With more support, this can grow bigger than WCI. I hope to introduce this to other non-affiliated state-based groups, encouraging them to act similarly. This could be a national trend.

I truly think public schools are the best place to start this. We can’t allow young people to be indoctrinated against guns for the first 18 years of life. By the time they leave high school, they are so biased against guns, only a dedicated minority will still embrace the Second Amendment in any recognizable form.

I think pro-gun folks are desperately looking for a way to have their voices heard. They don’t hear their views represented in the media. There are so many people who reject the demonization of lawful carry and gun ownership and who are eager to find a way to express their support for the Second Amendment. #2ATuesday has the potential to give them that outlet.

*Students willing and wishing to participate in #2ATuesday should confirm that a school’s dress code does not specifically call out pro-gun apparel but only violent messaging.

Kevin M • an hour ago

Do you want to end up suing your school for being anti-gun? Wisconsin Carry will help. If a school disciplines a student for wearing a pro-gun t-shirt with a NON-VIOLENT message. WCI will sue on that student’s behalf. Break out those non-violent t-shirts EVERY TUESDAY…. post pictures to Instagram or Twitter and tag them #2Atuesday and #Weprotect. Read this blog to learn more.”