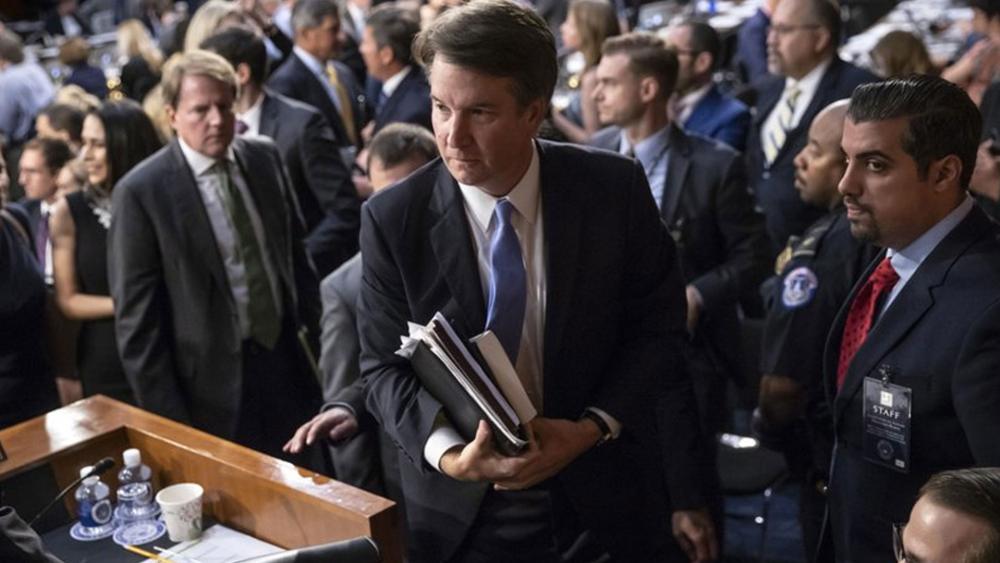 WASHINGTON – Sixty-five women who say they have known Judge Brett Kavanaugh since high school are coming to the Supreme Court nominee’s defense after allegations of sexual misconduct were leveled at the judge this week.

On Thursday, Sen. Dianne Feinstein (D-CA) announced she’d forwarded a letter from an anonymous constituent to the FBI reportedly alleging a decades-old incident involving Kavanaugh and a girl from high school.

Bribes, Threats of Sexual Violence: Inside Liberals’ Attempts to Force Sen. Collins to Vote ‘No’ on Kavanaugh

“I categorically and unequivocally deny this allegation. I did not do this back in high school or at any time,” he said in a statement Friday.

And in a letter to the Senate Judiciary Committee, Kavanaugh’s 65 former classmates are throwing their support behind the 53-year-old nominee, insisting the charges are false.

“Through the more than 35 years we have known him, Brett has stood out for his friendship, character, and integrity,” the missive continued. “In particular, he has always treated women with decency and respect. That was true when he was in high school, and it has remained true to this day.”

“The signers of this letter hold a broad range of political views,” the letter read. “Many of us are not lawyers, but we know Brett Kavanaugh as a person. And he has always been a good person.”

Shortly after Senate Judiciary Chairman Chuck Grassley (R-IA) announced the committee will vote on Kavanaugh’s nomination next Thursday, Feinstein called for a delay, citing new information on the nominee.

Feinstein told Republicans she sent a letter to the FBI to review but did not show it to any Senate Judiciary Committee Republicans. According to Fox News, Feinstein received the letter in July from Rep. Anna Eshoo (D-CA) but did not reveal it publicly until Thursday.

“That individual strongly requested confidentiality, declined to come forward or press the matter further, and I have honored that decision,” Feinstein said. “I have, however, referred the matter to federal investigative authorities.”

The White House quickly expressed extreme skepticism over the timing of the new information.

“Throughout his confirmation process, Judge Kavanaugh has had 65 meetings with senators—including with Senator Feinstein—sat through over 30 hours of testimony, addressed over 2,000 questions in a public setting and additional questions in a confidential session. Not until the eve of his confirmation has Sen. Feinstein or anyone raised the specter of new ‘information’ about him,” White House spokesperson Kerri Kupec said in a statement.

Kupec suggested the letter is just the latest attempt by Democrats to derail Kavanaugh’s confirmation.

“Senator (Chuck) Schumer promised to ‘oppose Judge Kavanaugh’s nomination with everything I have,’ and it appears he is delivering with this 11th-hour attempt to delay his confirmation,” Kupec said.

On Thursday afternoon, the FBI announced they do not plan on launching a criminal investigation into the matter.

“Upon receipt of the information on the night of September 12, we included it as part of Judge Kavanaugh’s background file, as per the standard process,” the FBI said in a statement.

Meanwhile, GOP lawmakers plan to continue the confirmation process according to schedule.

“Senator (Chuck) Grassley is aware of Senator Feinstein’s referral. At this time, he has not seen the letter in question, and is respecting the request for confidentiality,” George Hartmann, Senate Judiciary Committee spokesman, said in a statement.

“There’s no plan to change the committee’s consideration of Judge Kavanaugh’s nomination,” he said.

“This has all the indicators of an 11th-hour character assassination and a desperate attempt to delay and defeat the nomination of Judge Kavanaugh, who has a sterling reputation in his community, his profession, his church and among hundreds of friends, colleagues and co-workers,” Severino said.

Republicans are hoping to have the 53-year-old judge confirmed to the high court by Oct. 1, when the 2018-19 term begins.