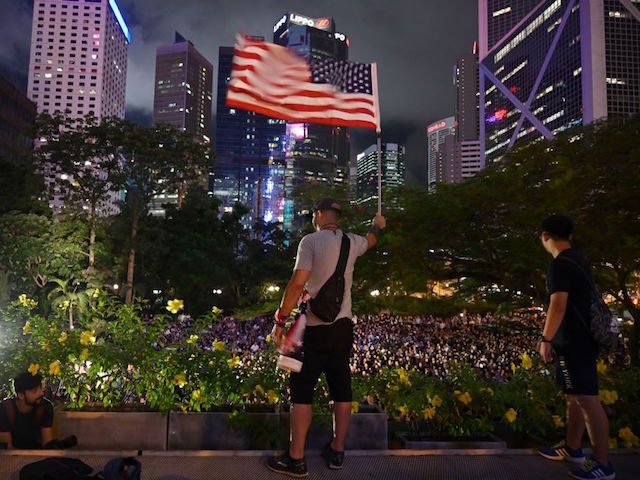 The American flag has become a symbol of resistance against China in the ongoing protests in Hong Kong, prominently waved throughout the city this past weekend as police fired tear gas and rubber bullets into the peaceful crowds.
Millions of Hong Kong residents have participated in rallies since early June against a bill proposed in the city’s legislature that would have allowed China to extradite anyone present in Hong Kong by accusing him or her of breaking Chinese law. Under the “One Country, Two Systems” policy China agreed to when the U.K. handed Hong Kong over in 1997, Hong Kong must abandon any claims to sovereignty in exchange for China not imposing communist laws on the city. The protesters objected that the extradition law would violate that policy.

Hong Kong Chief Executive Carrie Lam claimed the bill was “dead” this month, but protesters astutely noted that lawmakers had tabled the bill, allowing them to revive it any time. Protesters are demanding that the Legislative Council withdraw the bill entirely.

Protests this weekend were not about the bill, but against gang violence towards protesters last week. Pro-democracy advocates congregated last week in northern Yuen Long, a rural area outside of the central city, to protest the bill. Following the protest, an estimated 100 white-clad thugs surrounded the peaceful crowds moving into the Yuen Long Mass Transit Rail (MTR) station, beating them with metal rods and bamboo sticks. Following the mob attack, 45 people were hospitalized and, despite the dozens of attackers, little more than ten people arrested.

Police have since confirmed that some in the crowd had ties to Hong Kong’s triads, or organized crime groups. Protesters in Yuen Long this weekend accused police of collaborating with the protesters, citing videos showing officers calmly chatting with some of the mob.

Protesters prominently waved American flags in Yuen Long on Saturday during a protest for which police refused to issue a permit: 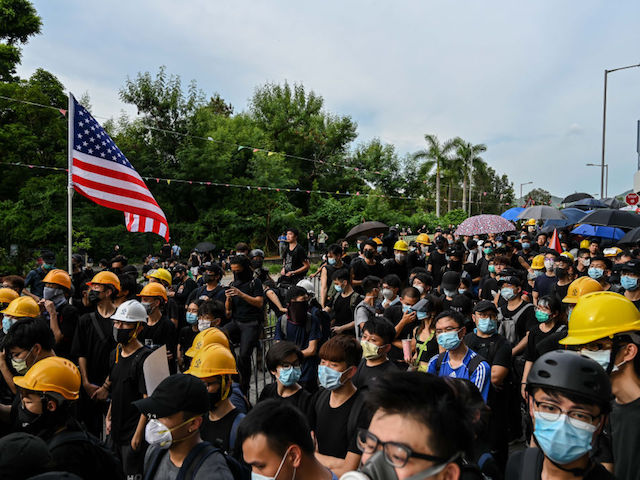 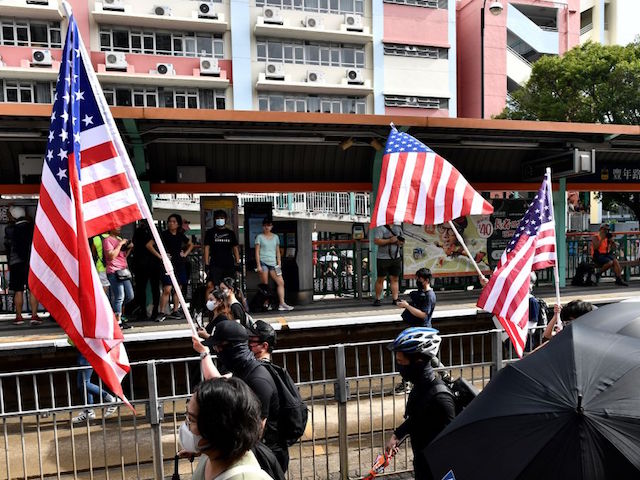 Protesters are seen during a stand-off with the police in the district of Yuen Long on July 27, 2019 in Hong Kong (Billy H.C. Kwok/Getty Images). 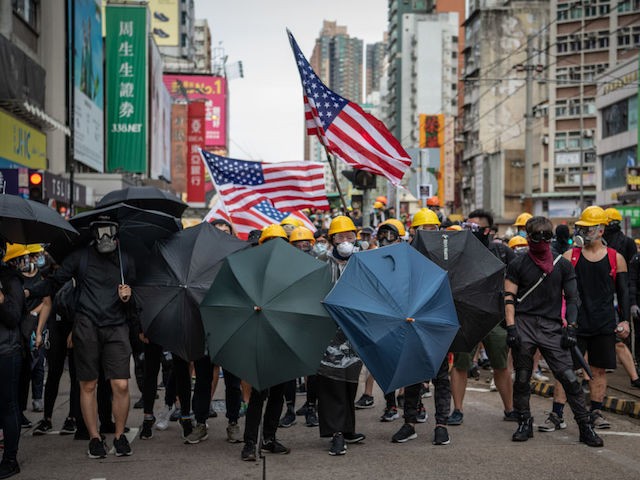 Protesters hold US flags, as commuters waiting at a light rail station watch, during a demonstration in the district of Yuen Long in Hong Kong on July 27, 2019 (Anthony Wallace/AFP/Getty Images).

As Hong Kong police denied the protesters a permit to march, they attacked the crowd despite its peaceful nature, using tear gas and rubber bullets to disperse them. Journalists on the ground noted that the protesters appeared unarmed and did not move against the police when the attacks began. Video circulating on social media appeared to show elderly residents of a Yuen Long nursing home coughing and choking on tear gas seeping through the windows, angering many in Hong Kong.

Police also arrested Max Chung, the pro-democracy activist who initially requested a permit for the march. Police denied the permit despite the fact that, unlike previous protests, it was not exclusively against the Hong Kong government, but against the triads who attacked the protesters. 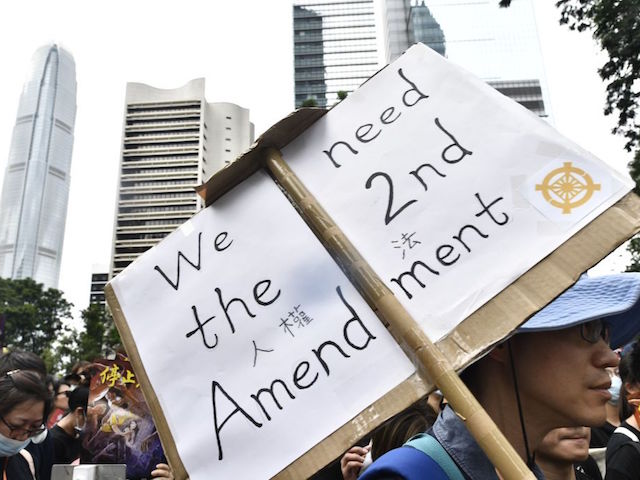 Protesters march during a demonstration in Hong Kong on July 28, 2019 (Anthony Wallace/AFP/Getty Images). 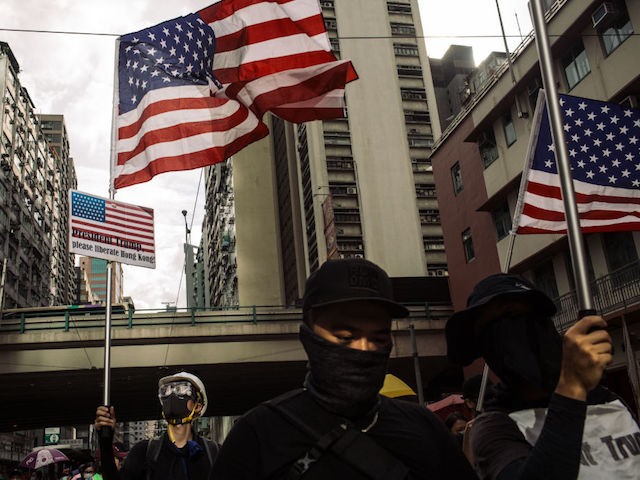 This weekend was not the first time the American flag surfaced as a symbol against Chinese tyranny. Pro-democracy protesters prominently waved the flag a week ago in the city center: 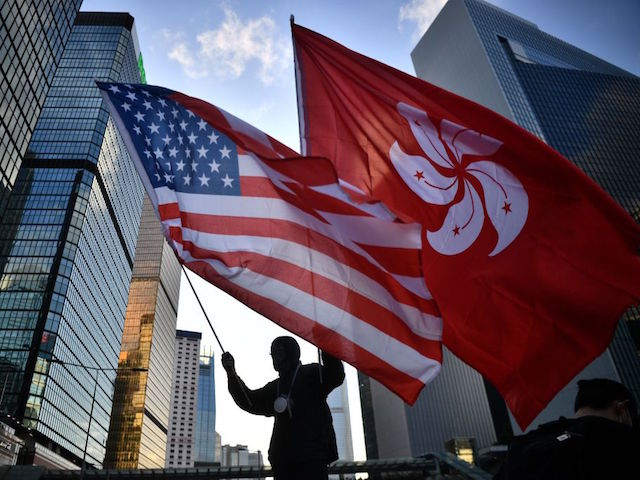 A protester waves the US and Hong Kong flags as demonstrators occupy a road during a march against a controversial extradition bill in Hong Kong on July 21, 2019 (Anthony Wallace/AFP/Getty Images). 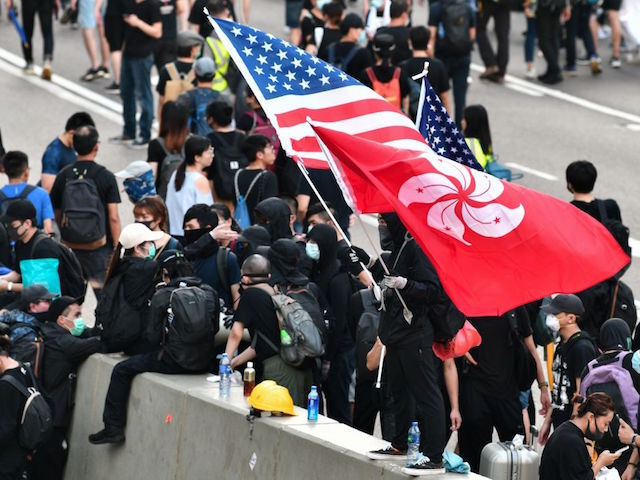 A man waves a US and Hong Kong flag while standing on a divider after he and other protesters occupied Harcourt Road while marching against a controversial extradition bill in Hong Kong on July 21, 2019. (Anthony Wallace/AFP/Getty Images).

“We hope the U.S. and other nations will be able to help Hong Kong fight against Communist China’s policies,” a protester identified as Kelvin Wong told Bloomberg News in remarks published on July 15. “We need human rights, democracy, and freedom. These are the same values we share with the U.S. These are universal values. Now we are resisting Communist China, which doesn’t like these values but also interferes with Hong Kong.”

Wong emphasized that, despite claims from Beijing, they “are not influenced by foreign powers.”

Another protester, Wildy Chan, told the Hong Kong Free Press that same week that he was waving a U.S. flag to urge America to act in support of Hong Kong’s pro-democracy movement. Chan stated that he, in particular, supported the Hong Kong Human Rights and Democracy Act, a bill Rep. Chris Smith (R-NJ) introduced, which, if passed, would facilitate visas to Hong Kong residents to escape communist China if necessary and require the State Department to submit an annual report evaluating if “Hong Kong is sufficiently autonomous to justify special treatment by the United States for bilateral agreements and programs.”

China has dismissed the Hong Kong protest movement as an attempt by the United States to destabilize China’s economy, even given the minimal commentary on Hong Kong from the White House. President Donald Trump went as far as to recently compliment Chinese Communist Party leader Xi Jinping, stating that he has “acted responsibly” in response to protests.

“Judging from what was on the media, we see clear signs of foreign manipulation, orchestration and even organization in the relevant violent incidents,” Chinese Foreign Ministry spokeswoman Hua Chunying said last week following Trump’s positive comments. “I hope the US will answer this question honestly and clearly: what role did the US play in the recent incidents in Hong Kong and what is your purpose behind it?”

“Though lacking self-knowledge, the US, I believe, should at least know one thing. Hong Kong belongs to China, and China does not allow any foreign interference in Hong Kong affairs. Nor will we allow any foreign forces to mess up Hong Kong,” Hua concluded. “We advise the US to withdraw its dirty hands from Hong Kong as soon as possible.”