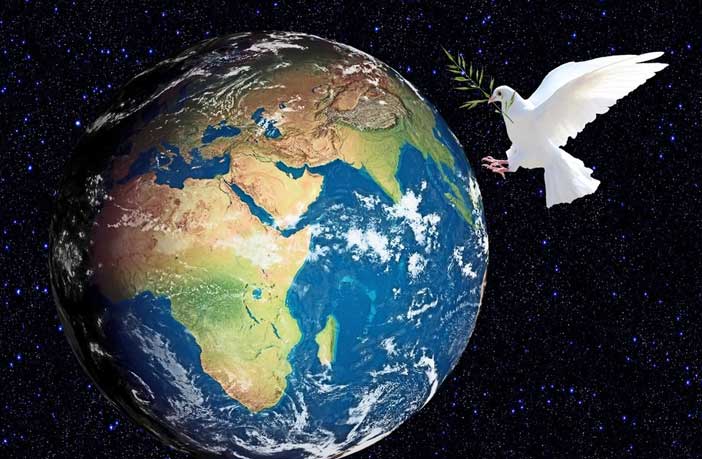 The first two official Peace Meditation videos (English and German) have been created, more languages will be added soon. Make them viral and spread them through your networks!

In addition to that, guided meditation videos have been created in 13 languages:

A very informative article about our Peace Meditation with many audio, video and interactive assistance tools is available here:

You can join our meditation in real time on COEO here:

Victory of the Light!

This article (Peace Meditation Videos) was originally published on The Portal and syndicated by The Event Chronicle.

A cancer treatment may soon be on the horizon, thanks to researchers at the Stanford University School of Medicine. A newly-developed treatment, which was tested on mice, has the potential to obliterate tumors within 10 days.

Science Mag reports that by injecting an immune-stimulating mixture directly into tumors in mice, the animals’ immune system was boosted, thereby being able to destroy not only the injected tumors but other tumors in their body.

“This is a very important study,” said immunologist Keith Knutson of the Mayo Clinic, who was not part of the research. “It provides a good pretext for going into humans.”

So far, researchers have tried injecting various concoctions containing molecules and viruses into the tumors. The goal is always the same: boost the immune system. However, the results have been varied. And, nearly every candidate they’ve tested in humans hasn’t worked. That’s why medical oncologist Ron Levy of Stanford University in Palo Alto, California, worked with colleagues to test the cancer-fighting capabilities of approximately 20 molecules — together. These include several types of antibodies that activate immune cells.

The researchers induced tumors in mice by inserting cancer cells just below the skin at two different locations on the abdomen. After tumors started to grow on both sides, the scientists injected the molecules — either alone or in combination — into one tumor in each mouse. The tumors were then regularly checked and their responses documented.

In the study, published in Science Translational Medicine, the team explained that a pair of molecules (a type of DNA fragment called CpG and an antibody against the immune cell protein (OX40) produced the best results. “On their own, they do almost nothing, but the combination is synergistic,” said Levy. When the two molecules were injected into mouse tumors, they disappeared in less than 10 days. Within 20 days, the non-injected tumors had also vanished.

The molecules have different functions. CpG stimulates dendritic cells which help instigate counter-attacks against cancerous cells. OX40 serves as a throttle of sorts for T-cells, another type of immune cell that battles tumors. The anti-OX40 antibodies charge up the T-cells. To test the mixture further, Levy and his team tested the approach in a mouse prone to breast tumors. Injecting the mixture into one tumor halted the growth of the second, as well as prevented any new breast tumors from growing.

Levy is hopeful the particular combination “will be very effective in patients.” He predicts it could work against a number of cancers. He also thinks it has the potential to eliminate metastases, the secondary tumors that result when cancer spreads.

The researchers are now tasked with determining whether or not the approach works in humans, as most rodent cancer therapies do not translate to humans. Levy and his colleagues have launched a clinical trial to evaluate the safety of their approach and to test its effectiveness in patients with lymphoma.

This article (New Cancer ‘Vaccine’ Boosts Immune System, Destroys Tumors Within 10 Days) was originally published on The Mind Unleashed and syndicated by The Event Chronicle.

Officials now say Fukushima reactor with MOX fuel “leaked directly from containment” — TV: Contamination of environment was due to “failure of vessel” — Experts: This has caused additional worries because MOX is more “radioactively aggressive” due to plutonium content (VIDEO)

http://www3.nhk.or.jp/nhkworld/english/news/20151217_27.html
NHK, Dec 17, 2015 (emphasis added): [TEPCO] says radioactive fallout that polluted the environment in mid-March of 2011 was likely caused by a leak directly from a containment vessel of the facility’s No.3 reactor. Officials… on Thursday reported their latest findings on what happened at the plant… They concluded that radioactive contamination of the environment between the night of March 14th and the 16th was likely caused not by the vent operations but failure of the vessel. They said the vessel likely lost airtightness due to heat from nuclear fuel, leading to the direct release of radioactive substances into the environment.

http://www.tepco.co.jp/en/press/corp-com/release/2015/1264512_6844.html
TEPCO, Dec 17, 2015: A significant release of steam from the night of March 14 to March 16, 2011 is believed to have been responsible for contamination to the surrounding environment of Fukushima Daiichi. The investigation reports that the primary containment vessels in Units 2 and 3 did likely lose leakage resistant properties by March 15 and had been in a condition where radioactive materials could leak directly from them. It is therefore presumed the environmental contamination outside Fukushima Daiichi during that period was caused by steam leakage directly from the primary containment vessels and not from the vent.

TEPCO, Dec 17, 2015: Leakage and release of a large amount of steam from the Unit 3 Reactor Building — The PCVs of Units 2 & 3 lost the airtightness in the end, which is confirmed by the fact that steam escaped from the Reactor Buildings. Analysis of the behavior of the pressure in the PCVs and the situation at the time of the accident has revealed that the environmental contamination from the night of March 14 to March 16 occurred by steam leakage together with radioactive materials directly from the PCVs not from the vent.

UBS Investment Research (via WikiLeaks), Apr 2011: Of particular concern was Unit 3, because, since September 2010, the plant had been fueled with mixed oxide, or MOx… Use of MOx heightened fuel risk — Fukushima Daiichi Unit 3 was fuelled with mixed oxide (MOx), which is about 93% uranium and 7% plutonium. This has caused additional worries for TEPCO and the government, because MOx is more radioactively aggressive. We think national nuclear safety reviews might consider restrictions on its use.

(N.Morgan) In this day and age of pollution, toxic chemicals, and even more toxic medicines, many people are finding themselves plagued by chronic illnesses and ailments and are turning back to Nature for the cures she may hold.

A true healer has come forward and stood up against the American Medical Association in court, with a list of diseases he can cure including some of the most life altering conditions people suffer from today such as: bipolar disorder, depression, ADHD, Mesothelioma, acid reflux and drug addiction.

This courageous man, Dr. Sebi, is a healer, pathologist, herbalist, biochemist and naturalist, who immigrated from Honduras and who has committed his life to the service of helping people cure their diseases. In essence he teaches his patients how to use nature to take care of their bodies.

In 1988, Dr. Sebi challenged the Attorney General of New York in a Supreme Court trial in which he was being sued for false advertisement and practice without a license after placing ads in a number of newspapers, including the New York Post, where he had anounced:

“Aids Has Been Cured By The Usha Research Institute, And We Specialize In Cures For Sickle Cell, Lupus, Blindness, Herpes, Cancer And Others.”

During the pre-trial period, the judge had asked Dr. Sebi to provide one witness per each disease he had claimed was cured, and Dr. Sebi provided 77 witnesses who appeared in person to attest to having been cured by Dr. Sebi.

In light of this, the judge was left with no choice but to proclaim the Doctor not guilty on all counts and proving Dr. Sebi did in fact have the cure for all the diseases advertised in the newspaper ads.

Many celebrities have sought out the secret to healing from the Doctor, such names as: Michael Jackson, Magic Johnson, Eddie Murphy, John Travolta and the deceased Lisa Left Eye Lopes who proclaims in the video below: “I know a man who has been curing AIDs since 1987”